After the fourth-quarter report Thursday, Macroeconomic Advisors economists trimmed their first-quarter growth estimate by 0.1 point to 1.1 percent, citing an unexpectedly large year-end inventory build that implies a decline in inventory investment in the first quarter. 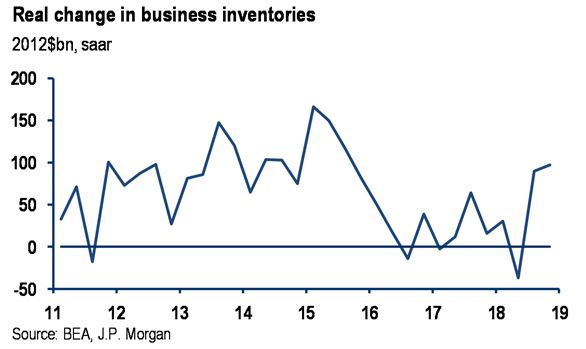 “I’m at 1.5 percent. We’ve got a slowdown in the first quarter, hopefully from transitory affects from the government shutdown and polar vortex. Hopefully there will be a snap back in the second quarter,” said Grant Thornton chief economist Diane Swonk. She expects second-quarter growth of 2.5 percent.

“You’re slowing down the run rate, but it’s still above the modest potential the economy has. That’s the good news. The bad news is it’s not enough to grow us out of our deficit problems,” Swonk said.

Kevin Cummins, senior economist at NatWest Markets, said his forecast for the first quarter coming into the fourth quarter report was 1.1 percent. The first quarter has traditionally been weak, and this year should be no different due to weather and other factors.

“We do show pretty solid growth in business investment in Q1. It really suggested that consumption was the main slowdown there,” he said. “It’s really an artifact of the weakness we saw at the end of Q4, rather than a fundamental weakening in the first quarter. You’re base level is weak at the end of the fourth quarter, so it’s a really tough comparison.” 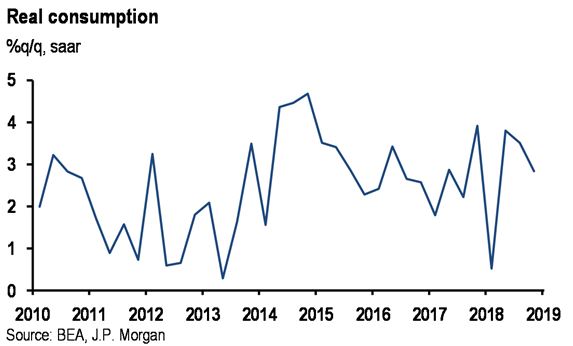 Cummins said the 1.2 percent decline in retail sales for December may not be revised, as some economists expect, when January retail sales are finally reported on March 11. The retail sales report, like much government data, was delayed by the 35-day government shutdown, which ended in late January.

The government said that the shutdown trimmed fourth-quarter growth by 0.1 percentage point.

Swonk said the comparison for the consumer this year will also be tougher because there was a boost from the tax cut last year and individuals saw less tax withheld from their paychecks.

“We start the year with slower spending because of the government shutdown and the polar vortex,” she said. “The good news is we’ve seen wage gains in low-wage jobs. That is helping boost spending at the low end, but we’re not seeing it ripple into the middle class, where we’d like to see more broad based gains.”