The Nikkei Asian Review is tracking the spread of the new coronavirus that originated in the central Chinese city of Wuhan.

Global cases have reached 16,340,152, according to Johns Hopkins University in Baltimore.

To see how the disease has spread, view our virus tracker charts: 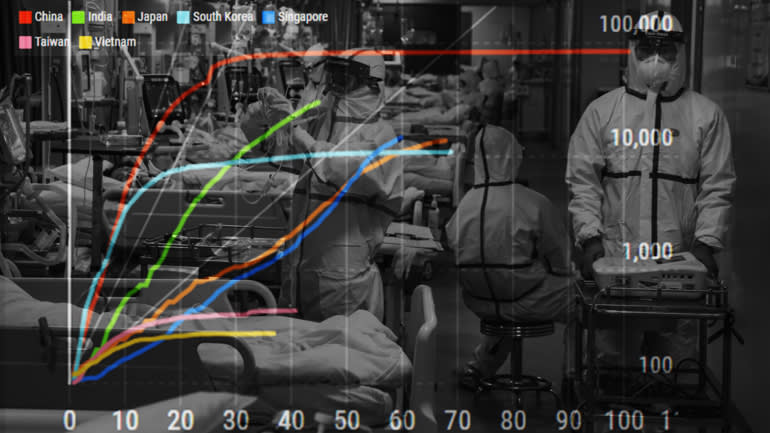 8:12 a.m. U.S. drugmaker Pfizer and Germany’s BioNTech say they are to begin a pivotal global study to evaluate their lead COVID-19 vaccine candidate. The vaccine could be submitted for regulatory approval in October, and the companies could be on track to supply up to 100 million doses by the end of the year. The announcement comes shortly after Moderna said it had launched an advanced stage trial with 30,000 participants.

6:48 a.m. Belgium announces sharp curbs on social contact after a surge of coronavirus infections in the past three weeks. From Wednesday, a Belgian family or those living together would only be able to meet five other people over the next four weeks, sharply down from 15 now.

5:40 a.m. Google will extend its work-at-home option for global employees by six months to the summer of 2021 as the coronavirus spread gathers pace in the U.S. while flaring up again in other parts of the world. The company had planned to return to normal work locations in early 2021.

4:23 a.m. The International Monetary Fund approves a $4.3 billion emergency loan for South Africa to help the country cope with the health and economic consequences of the the coronavirus pandemic.

3:00 a.m. California’s attorney general has begun a probe into what Amazon.com has done to protect its workers during the coronavirus pandemic, Reuters reports, citing a court filing.

1:45 a.m. U.S. biotech company Moderna’s vaccine against COVID-19 could become available by the end of this year, U.S. officials say after the developer announces it has begun a trial involving 30,000 subjects.

11:20 p.m. Prime Minister Narendra Modi says India is ramping up its COVID-19 testing capacity to reach 1 million tests per day in the coming weeks. That would be roughly double the current level.

In January, when India confirmed its first COVID-19 case, it had just one coronavirus testing center. Now there are nearly 1,300 such laboratories across the country, Modi says, inaugurating three “hi-tech” testing facilities at a videoconferencing event.

7:38 p.m. World Health Organization Director-General Tedros Adhanom Ghebreyesus says the pandemic is easily the worst global health emergency. Only with strict adherence to health measures, from wearing masks to avoiding crowds, would the world be able to beat it, he added. “Where these measures are followed, cases go down. Where they are not, cases go up.”

6:00 p.m. Japan Airlines is expected to report an operating loss of about 120 billion yen ($1.1 billion) for the April-June quarter, Nikkei has learned. This will mark the biggest quarterly loss for Japan’s flag carrier since its stock market relisting in 2012. JAL’s utilization rate on its international routes was as low as 4% in June, 6% in May and 23% in April.

5:55 p.m. Hong Kong reports 145 cases, of which 142 were locally transmitted. This marks a new daily high just hours after the city announced its toughest measures yet to curb a community outbreak.

A man wears a face mask while walking along a street in Hong Kong on July 22.
READ  Kinzoo could be a better alternative to Facebook Messenger for kids - Techaeris

4:55 p.m. Mitsubishi Motors says it expects a group net loss of 360 billion yen ($3.4 billion) for the year ending March 2021, marking the second straight year of red ink, as sales cratered due to the coronavirus pandemic.

4:17 p.m. Dine-ins at restaurants in Hong Kong will be banned for seven days starting on Wednesday as the city fights a third wave of infections. Gatherings of more than two people will also be prohibited. Meanwhile, the wearing of face masks will be made compulsory in all public premises.

3:17 p.m. ANA will further reduce the number of domestic flights in August from what it had announced on July 14. The Japanese carrier now says it will operate at 77% of scheduled flights for the month, down from the previously planned 88%, as cases increase and bookings turn out to be slower than expected.

2:00 p.m. Vietnam is evacuating 80,000 people, mostly local tourists, from the central tourism hot spot of Danang after the first community infections since April were confirmed on the weekend. The evacuation will take at least four days with domestic airlines operating approximately 100 flights daily from Danang to 11 Vietnamese cities.

12:30 p.m. Gold prices jump to record highs as an intensifying U.S.-China row hammered the dollar and cemented expectations that central banks would continue pumping out stimulus to ease the economic pain from a worsening coronavirus pandemic.

11:50 a.m. China’s industrial profits in June rose for a second straight month and at the fastest pace in more than a year, the statistics bureau says, another sign that the country’s economic recovery from the coronavirus crisis is gaining momentum. Steel, oil and gas extraction as well as the nonferrous metal sector led the way to an 11.5% profit increase from the year-earlier level to 666.55 billion yuan ($95.27 billion), the fastest pace of growth since March 2019.

China’s industrial profits in June rose for a second straight month and at the fastest pace in more than a year. Steel, oil and gas extraction as well as the nonferrous metal sector led the way.

10:06 a.m. Japanese companies’ sales dropped 7.5% in the January-March quarter from a year earlier, according to a downward revision to a preliminary 3.5% decrease, released in June, the finance ministry says. The tumble is the largest since the April-June quarter of 2011, after Japan was walloped by a major earthquake and tsunami. Japanese companies’ capital spending rose 0.1%, another big reduction from the preliminary 4.3%.

The inclusion of more small and midsize companies that were hit harder by the virus than large ones led to worse numbers, the ministry says.

9:40 a.m. The Bank of Japan is wary of risks to Japan’s economic outlook, including the possibility that its recovery may be delayed as it takes time to adjust to structural changes brought by the pandemic, a summary of opinions at the mid-July meeting shows. One board member said, “The economy may not rebound to the pre-pandemic level even in fiscal 2022,” which ends March 2023.

8:35 a.m. South Korea’s auto output tumbled nearly 20% to an 11-year low in the first half of the year due to the coronavirus outbreak, industry data shows, according to Yonhap News Agency. The country’s five major automakers produced 1.63 million vehicles in the January-June period, down 19.8% from a year earlier. It was the lowest figure since the first half of 2009.

South Korea’s auto industry took a big hit from the coronavirus outbreak in the first six months of this year.

8:30 a.m. The White House and Senate Republicans reach “an agreement in principle” on the next coronavirus relief bill, a White House official says, according to Reuters.

2:02 a.m. Toyota Motor has asked suppliers to lower prices on certain parts, citing sluggish sales and a drop in material costs amid the coronavirus, Nikkei has learned, in a move that could hit earnings in the sprawling supply chain of one of the world’s largest automakers.

1:30 a.m. Moderna says it has received an additional $472 million from the U.S. government’s Biomedical Advanced Research and Development Authority to support the development of its late-stage coronavirus vaccine clinical trials, including an expanded Phase 3 study. In April, Moderna received $483 million from the U.S. federal agency, which funds disease-fighting technology.

9:48 p.m. Indian Prime Minister Narendra Modi says it is important to practice social distancing and wear masks to fight the virus in his monthly radio broadcast to the nation. “The danger of corona is far from being over. At many places, it is spreading fast,” Modi says. “We need to be extra vigilant.” More than 48,000 cases were confirmed in the past 24 hours.

4:20 p.m. Tokyo reports 239 new cases as Japan’s infections jump in urban areas. The latest figure for Tokyo comes a day after the capital reported 295 new cases, with a single-day record of 366 confirmed on Thursday. It was the sixth straight day for the figure to eclipse 200, bringing the cumulative total for the capital to 11,214.

6:51 a.m. Brazil registers an additional 1,211 deaths attributable to the novel coronavirus over the past 24 hours and another 51,147 confirmed cases, according to the health ministry. The nation has now registered 86,449 deaths and 2,394,513 total confirmed cases.

12:13 a.m. North Korean leader Kim Jong Un declares an emergency and a lockdown in a border town after a person suspected of being infected with the novel coronavirus returned from South Korea after illegally crossing the border, state media says.

4:41 p.m. Tokyo reports 295 new daily cases, while the nationwide overall tally tops 30,000, as Japan’s increase in infections in the capital and other urban areas moves ahead. The figure is the second-highest single-day total for Tokyo, which logged a record 366 daily cases on Thursday.

2:06 p.m. Vietnam is back on high alert after medical officials in Danang detect the central city’s first locally transmitted case in three months. Thanks to strict quarantine measures and an aggressive and widespread testing program, the country has kept its virus total to an impressively low 415 cases; it had reported no local transmissions for 100 days.

10:30 a.m. China reports 34 mainland cases for Friday, up from 21 cases a day earlier, according to the country’s health commission. Of the new infections, 20 were in the far western region of Xinjiang, nine were in the northeastern province of Liaoning and five were imported cases.

9:18 a.m. The U.S. records more than 1,000 deaths from COVID-19 for the fourth day in a row on Friday, according to a Reuters tally, as the Trump administration stresses the need for children to go back to their classrooms despite safety fears.

8:05 a.m. The U.S. doubles down on claims that Chinese consulates are facilitating espionage, including attempted theft of COVID-19 vaccine research, after it ordered the Chinese Consulate in Houston to close, citing the city’s importance in medical research.

8:01 a.m. People who are obese or overweight are at increased risk of death or severe illness from COVID-19, Public Health England says in a report as the U.K. government prepares to introduce measures to confront the problem.

6:50 a.m. Sao Paulo, South America’s largest city, postpones its 2021 Carnival celebrations as Formula One scraps its next planned race there.

5:49 a.m. Many companies in Japan have responded to the pandemic by encouraging or requiring employees to telecommute, but this is not always possible. Some workers need to come to the office for safety or security reasons, and businesses are finding ways to mitigate the risk of spreading the virus, such as by erecting cardboard partitions between desks.

5:20 a.m. The National Zoo in Washington partially reopens to visitors for the first time in more than four months, despite the capital’s mayor expanding public health measures to fight the coronavirus this week.

At Philly Tech Week, the example of a global nonprofit leveraging tech and human connection to eradicate poverty – Generocity

New research shows European startups are spending drastically less on a US launch, for the same gains – TechCrunch