Stocks sensitive to trade with China fell hard as U.S. Trade Representative Robert Lighthizer told Congress he is looking for a tough deal with China that will include enforcement and be bigger than just an increase in Chinese imports of U.S. goods.

The stock market was broadly lower but some of the Chinese-related plays were hit even harder.

The Van Eck Seminconductor ETF SMH, for instance, fell to its low of the session was down as much as 2 percent as Lighthizer told a congressional panel Wednesday that he is looking for a deal that will curb Chinese practices in regards to failure to protect intellectual property, cybertheft and unfair investment practices. It was off about 1.4 percent in late-morning trading.

The iShares China Large Cap ETF FXI fell sharply. Apple, which has a high revenue exposure in China, was also lower. Both later came off their lows. 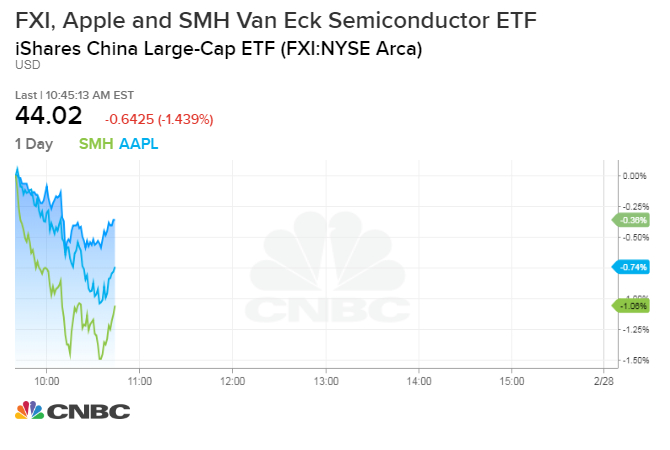 Dollar Tree, which relies heavily on Chinese imports, was down 1.4 percent in late-morning trading.

“He’s not making clear that this is easy, saying ‘we’re almost there’ and ‘we’re wrapping it up.’ There’s more time to go before we get an agreement,” said Peter Boockvar, chief investment officer at Bleakley Advisory Group.

Stocks have been boosted by the prospect of a trade deal with China, particularly during the last couple of weeks of negotiation. President Donald Trump this past weekend indefinitely delayed a March 1 deadline on a new round of tariffs that would have boosted existing 10 percent tariffs to 25 percent on $250 billion in Chinese goods.

“[Lighthizer] was not clear on what they’re doing with the tariffs. I don’t think anything he said is new. I know [the stocks] responded. It will be a long process after even signing the China deal. Obviously China purchases are not going to be enough. He basically said we have a lot of work to do and this is not a layup,” said Boockvar.

Lighthizer has been known to want to take a hard line against China and demand a measurable enforcement mechanism in any agreement. He told the House Ways and Means Committee on Wednesday, “If we make headway to stop this transfer of technology, this unfair trade by this trading partner, it’s going to have a huge impact in terms of jobs and high-end jobs in America,”

Some strategists say if existing tariffs are left in place as a means of enforcement, that would be a negative for markets.

“He didn’t say anything about existing tariffs,” said Boockvar.

Dan Clifton, head of policy research at Strategas, that the trade representative may have agreed to appear before the congressional committee to strengthen his hand with the president.

“We were surprised last week to see the Administration agree to a trade hearing with a Democratic Congress just days before the March 1st trade deadline,” Clifton wrote. “There is little upside here. Democrats are looking to regain the trade enforcement angle Trump has stolen from them and no China deal will ever be enough for the Democratic Congress.”

Clifton said Lighthizer’s appearance could be related to his disagreement with Trump over what to accept in a China trade agreement.

“Lighthizer wants to escalate tariffs to force the Chinese to commit to structural reforms on state-owned enterprises and Made in China 2025. Trump is sympathetic to this argument. But the President wants to win re-election and business investment has slowed considerably since the existing tariffs were ramped up. Our sense is that Lighthizer wants to use the hearing to strengthen his hand with the President in the final weeks of the China negotiations,” Clifton noted.

Johnson stays loyal to man who helped him into Number 10

Aston Martin's chief to leave as a part of shake-up: FT

Somewhere, under the rainbow, there's a Bentley