Bed Bath & Beyond settled a months-long spat with a trio of activist investors on Wednesday, saying it would nominate four new members to its board of directors in addition to finding a permanent replacement for former CEO Steven Temares.

Bed Bath & Beyond also agreed to form a committee that, among other duties, will weigh the potential sale or spin-off of underperforming businesses, a source familiar with the situation told CNBC.

Those businesses, including Cost Plus World Market, Buy Buy BABY, PersonalizationMall and Christmas Tree Shops in sum are worth as much as $1.36 billion, or about $10 per share, according to Legion Partners Asset Management, Macellum Advisors, and Ancora Advisors.

“We are pleased to have reached this resolution with Bed Bath & Beyond, which is the result of collaborative dialogue and intensive engagement with the Company,” the investor group said in a press release Wednesday. “We are optimistic about the company’s efforts to find a best-in-class CEO to drive shareholder value and applaud the Board’s commitment to building an even stronger future for shareholders.”

An operator of more than 1,000 stores across the U.S. and Puerto Rico, Bed Bath & Beyond is susceptible to the online competition that ushered other mall-based retailers like Sears Holdings and Toys “R” Us Inc. into bankruptcy. It laid off nearly 150 people in March, affecting its Christmas Tree Shops business, a discount home decor chain it acquired in 2003.

The company’s underperformance may have posed an attractive entry point for the activist trio, which first leveraged their approximate 5% stake in March with calls to replace the company’s entire 12-person board. Though a complete overhaul did not come to pass, the investor group has seen some success since launching its public campaign against what it deemed “failed” execution and strategy at the company.

The stock fell about 1% in early trading on Wednesday.

“We are at an important inflection point in the Company’s history, and with the benefit of a newly transformed Board, the Company is committed to taking the right actions to further enhance our competitive and financial position, transform Bed Bath & Beyond faster to win in the omnichannel marketplace and execute on our priorities,” Mary Winston, Bed Bath & Beyond’s Interim CEO added in Wednesday’s press release.

Bed Bath & Beyond faces significant competition from Amazon and its more adaptive rivals. Peers including Walmart and Target have poured cash into their online platforms to keep up with Jeff Bezos’s disruptive e-commerce giant, now a popular option for shoppers looking to buy towels, bedding, or kitchen appliances.

Bed Bath & Beyond has recently tried to double down on improving its in-store experience through its Next Generation initiative, which features a greater emphasis on home decor, beauty care, lifestyle merchandise and a reduction in inventory and clutter.

Temares lauded the new stores during the company’s fourth-quarter earnings call on April 10, noting that sales in the Next Generation locations were about 2.2% higher than in comparable Bed Bath & Beyond outlets.

“If you look at the next-generation store for Bed Bath and you look at the merchandise that we’re offering, the health and beauty care, the food and beverage, the scarcity product, the home decor … it comes from different concepts, different banners,” Temares said at the time. “These all geared to do more with the customer.”

Ancora, Legion and Macellum weren’t convinced. The group later blamed Temares in a presentation following the earnings report for disappointing sales figures over the long term and faulted what they characterized as his ability “to accomplish only a small percent of countless initiatives.”

The activists added that Bed Bath & Beyond shares had underperformed retail peers in shareholder return by 800% since Temares took the reins in 2003. The company later announced Temares’s resignation on May 13, ending his 16-year tenure at the head of the company. 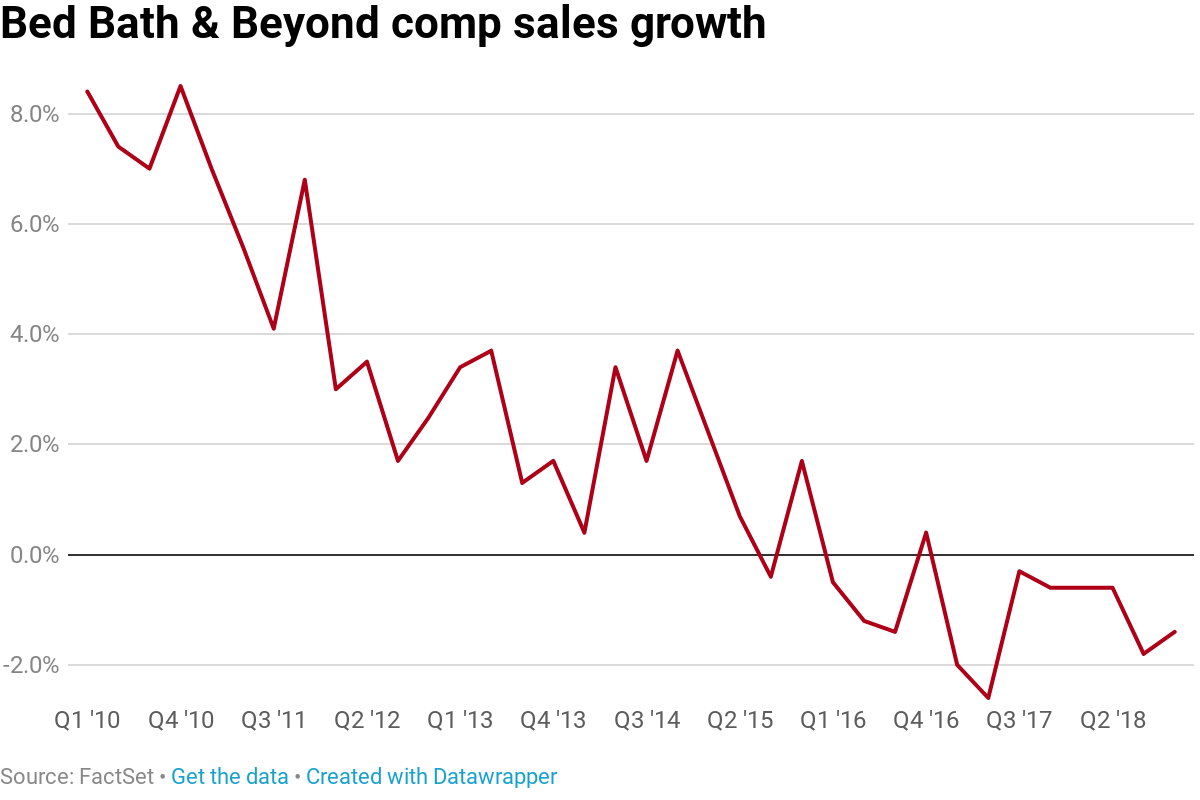 Since a peak market cap north of $17 billion in 2012, Bed Bath & Beyond has shed about 90% of its worth and was last valued at $1.78 billion. The stock is down more than 24% in the past 12 months versus rivals like Target and Walmart, which have both outpaced the broader stock market over the same period.

Still, Bed Bath & Beyond has defended its business practices more broadly, saying in April that “the Activist Group has steadfastly declined to engage in a constructive dialogue with the Company, and instead, has chosen only to release its perspectives in a public forum.”

“The Board remains open to constructive feedback from all shareholders, and consistent with this approach, will consider any value enhancing perspectives,” Bed Bath & Beyond added at the time.

The activist campaign also foreshadowed a major restructuring of the company’s board. In addition to the new appointments announced Wednesday, the company said last month that it installed five new independent board members, replacing some directors including co-founders Warren Eisenberg and Leonard Feinstein.

The latest additions of John Fleming, Sue Gove, Jeffrey Kirwan and Joshua Schechter — all of whom were nominated by the activist coalition — will buoy board membership to 13 directors. Activist hedge funds launched 89 campaigns in 2021. Here’s how they fared

Banks are finding out that inflation, which has helped their stocks, is a double-edged sword

What happens to your digital assets and cryptocurrency when you die? Even with a will, they may be overlooked

Can you get more state pension? Free online check lets Britons know where they stand