2019 was a big year for Apple‘s (NASDAQ: AAPL) services business. The company held an event in March introducing several new services that could be instrumental to its future growth prospects. Offerings like Apple Arcade, Apple TV+, and Apple Card produce recurring revenue streams and lock customers into the Apple ecosystem. Apple highlighted the early successes of those services in its year-end roundup, which it had historically reserved for just its App Store — still a massive part of its services business.

Wedbush analyst Dan Ives values the services business highly. He thinks it’ll be worth $500 billion to $650 billion by the end of 2021. To put that in perspective, that’s about the same value as Facebook (NASDAQ: FB) right now.

Apple’s services business should see continued growth over the next couple years, especially if the widely expected 5G iPhone supercycle comes to fruition. The more stable recurring-revenue stream from services should help balance the more cyclical device sales that represent the core of Apple’s business. 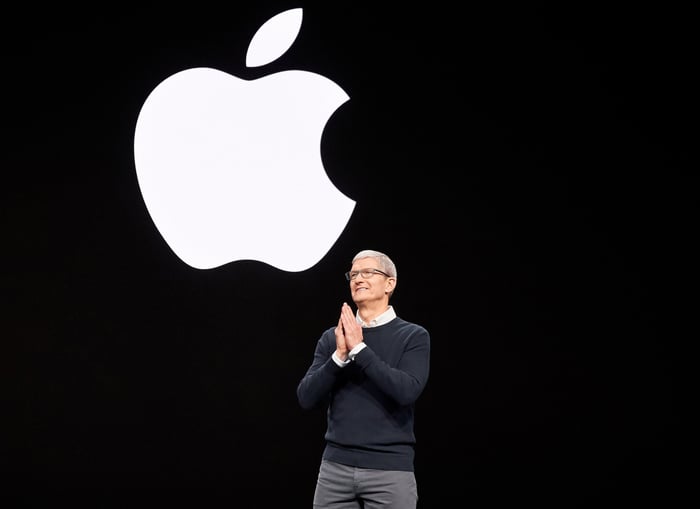 Apple’s services revenue increased more than 16% in fiscal 2019 to $46 billion. Ives expects Apple to maintain that pace over the next two years to reach $60 billion in 2021.

That expectation is more than reasonable. As I mentioned above, Apple launched several new services in 2019 that ought to show considerable growth over the next two years.

Most Apple TV+ subscribers don’t pay for it directly, instead receiving it as part of the company’s new device sale promotion. That could quickly turn into a substantial revenue stream. Apple Arcade might cannibalize App Store sales, but with higher average revenue per user (ARPU) and the potential for greater gross margin. Finally, Apple Card continues to add retail partners to incentivize everyday use.

Moreover, many analysts expect Apple’s iPhone sales to improve over the next couple of years as consumers upgrade their devices to take advantage of new 5G wireless networks. Ives estimates that there are 350 million iPhone owners in the upgrade window. UBS analyst Timothy Arcuri expects over 400 million iPhone unit sales over the next two years. D.A. Davidson analyst Tom Forte expects positive unit sales growth in each of the next two years as well.

Climbing iPhone unit sales, along with the resale of newly relinquished second-hand phones, should result in a considerable increase in Apple’s install base. Meanwhile, ARPU is growing for Apple’s services business as a whole. For reference, Apple’s services revenue climbed in fiscal 2019 despite a 14% decline in iPhone revenue. As ARPU and the number of iPhones in use both increase, Apple should produce strong growth in services revenue over the next couple years.

Another noteworthy aspect of Apple’s services business is its gross margin. The company started breaking out the cost of sales for its services segment last year, and the numbers didn’t disappoint.

That number could continue expanding over time, but investors should remain a bit cautious. Apple is making a couple of big long-term bets on services with the introductions of Apple Arcade and Apple TV+. Both require large up-front content investments from the company.

READ  'India to be heaven for startups' - Deccan Herald

Apple TV+’s reported $6 billion content budget will start showing up in the company’s cost of sales this year as it amortizes the expense over the expected lifetime of the content. How Apple will account for Apple TV+ subscribers on its free year promotion remains to be seen.

By investing in content up front, Apple effectively fixes its biggest costs. So the more subscriptions it sells, the higher its gross margin. As such, gross margin should expand over time, but investors may see some lumpiness in the near term.

A $60 billion business with gross margin exceeding 60% and growing its top line at a mid-teens annual rate is certainly a very valuable asset.

For perspective, Facebook generated $66.5 billion in revenue with a gross margin above 80% over the last 12 months, and the market currently values it around $630 billion. It’s also growing revenue faster than Apple’s services segment. Granted, Facebook faces more regulatory scrutiny than Apple (not that Apple is free of scrutiny itself), and its research and development expenses are likely higher than what Apple is spending on services. So perhaps it evens out when it comes to the bottom line — or perhaps not.

But there’s truly no comparison for Apple’s services business. Not only is it a high-margin and relatively fast-growing source of revenue, it’s a key aspect of the Apple ecosystem. The more services Apple device owners subscribe to, the more likely they are to buy high-priced devices from the tech company again at some point in the future. That certainly warrants a premium valuation for the services segment, but it also points to the flaws in trying to value certain companies as the sum of their parts.

Motley Fool co-founders Tom and David Gardner have spent more than a decade beating the market. After all, the newsletter they have run for over a decade, Motley Fool Stock Advisor, has tripled the market.*

Tom and David just revealed their ten top stock picks for investors to buy right now. Apple is on the list — but there are nine others you may be overlooking.

Is It Necessary To Hire Legal Assistance For Your Startup Business? – KHTS Radio

How Venture Capital in the US and China is Shifting – Nasdaq

The boss who put everyone on 70K – BBC News

What Happened At A Nasscom Conclave For Deep Tech Startups? – Analytics India Magazine