Recent moves by retail stocks prove that Amazon hasn’t been able to squash all of its competitors, according to Susquehanna’s Stacey Gilbert.

The SPDR S&P Retail ETF XRT was up 1 percent on Wednesday after Best Buy surged 16 percent on the back of strong earnings for its holiday quarter. The XRT is now up 12 percent this year, in line with the S&P 500.

When Gilbert inspected the action in the XRT, an equal-weighted collection of retail stocks that includes names like Wayfair, Party City and Macy’s, one notable trend stood out.

“The correlation, meaning how well these stocks are moving together, is near multiyear lows, and that’s going to happen when you have a name like Wayfair that’s up over 80 percent year to date, versus Macy’s, down 16 percent,” she said Wednesday on CNBC’s “Trading Nation.” “We think what this is showing is that retail isn’t dead, and Amazon didn’t kill everybody.”

Still, it’s more important than ever to pick and choose your holdings when it comes to retail rather than trusting a broad-based basket, Gilbert said. She pointed to Foot Locker’s stock, which is positively rated by Susquehanna for its popularity with customers, operational discipline and partnerships with top athletic brands.

“This is a name we want to own, and we would rather own specific names [where] we know the stories, where we see the growth, rather than the basket as a whole,” Gilbert said.

“The momentum’s out above the 50- and 100-day moving averages,” he said, referring to the XRT. “There are chart patterns that are bullish and there’s room to run to the 200-day [moving average] — about 3 percent to go.” 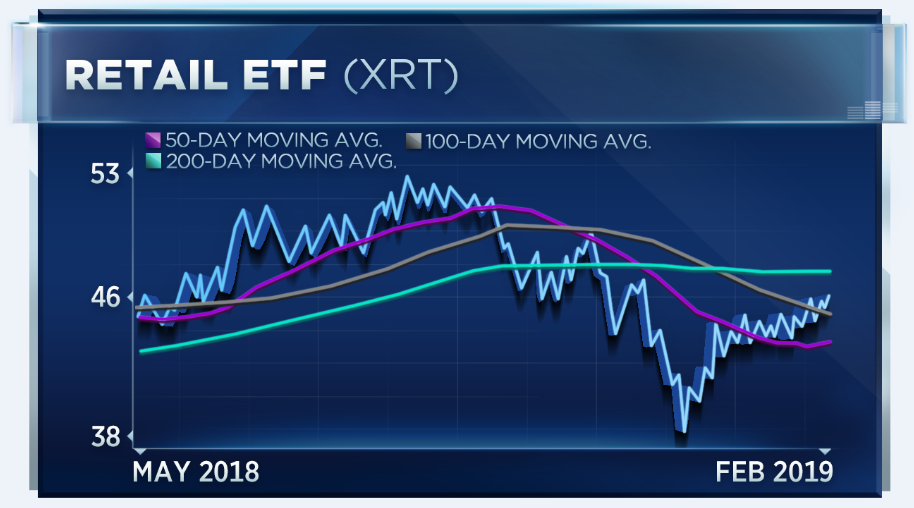 Still, the XRT has a few hurdles before Baruch will let himself get truly bullish, most notably the $46.50 level. If the XRT can trade above it, that would create the necessary momentum for the ETF to surge higher, the futures expert said.

“I’m worried, or won’t get bullish, until it does that,” Baruch said.

The XRT is still trading roughly 13 percent off its August high.

Disclosure: Susquehanna is a market maker in the securities of Foot Locker and XRT.

US STOCKS-Dow, S&P 500 down after Apple's sales warning but off session lows

Leon Cooperman says the market has become too pessimistic on energy stocks, too euphoric on Tesla